How Is CBD Absorbed Into The Skin?

Home › CBD News › How Is CBD Absorbed Into The Skin?

As the CBD industry is still relatively new, the research on its applications can be lacking. Therefore, we are still discovering all the ways that CBD can interact with the human skin. Nevertheless, there are a lot of indicative scientific papers that show the positive results of applying CBD to the skin. This article is a summary of current scientific papers that investigate the ways that CBD interacts with the skin and the benefits it may have when incorporated into your skincare routine.

Firstly, in order to understand the effect of CBD on the skin it is important to understand how the skin itself works and what it is comprised of. Human skin is a natural barrier for the body consisting of three main layers: the epidermis, the dermis, and the subcutaneous tissue. The epidermis is the outermost coat and comprises mainly of dead skin cells and acts as a waterproof barrier. The dermis, which lies beneath the epidermis, comprises of skin cells, some blood capillaries, hair follicles, sebaceous glands and sweat glands amongst others. The subcutaneous tissue is mainly comprised of fat cells and larger blood vessels and its main purpose is to act as an additional layer of protection from external factors, like heat and humidity changes, and substances that could otherwise enter the body through the skin. 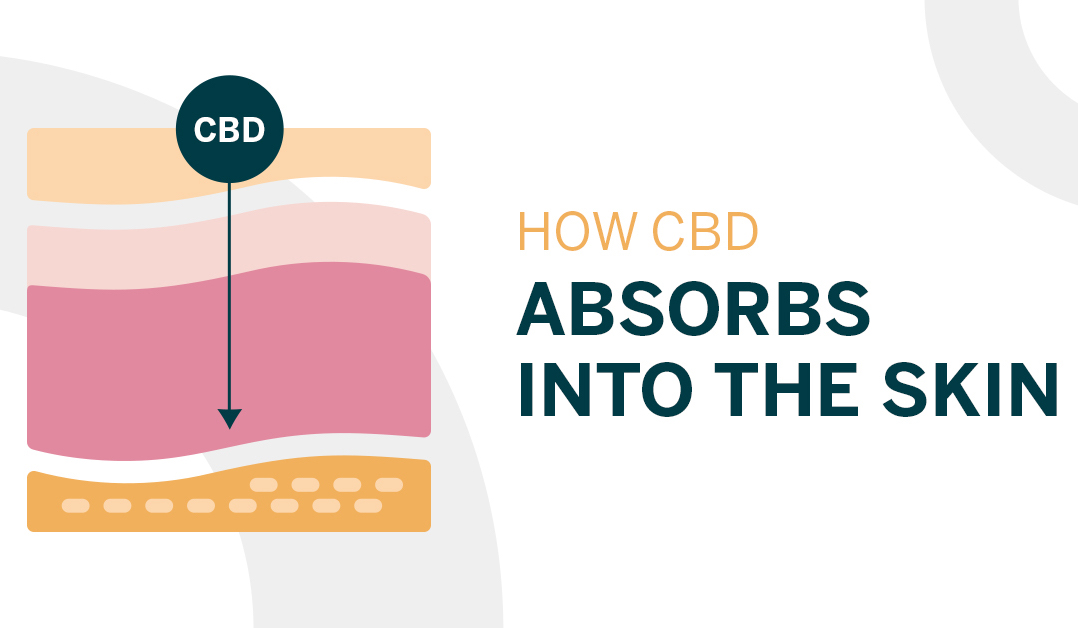 So how do medical and cosmetic molecules enter our body through all the skin’s defences? When it comes to CBD, there is plenty of scientific literature that claims there are health benefits from application of CBD to the skin. Although CBD does not penetrate the deepest layers of the skin, it can be absorbed by the skin. Research indicates that after application on the skin CBD can be found in blood plasma, which is an indicator that CBD skin application is practically viable.

When it comes to CBD administration through skin, it is important to choose a suitable vehicle for topical administration. Elements that affect CBD’s absorption include solubility and thermodynamic activity (how the substance interacts with other substances) as well as penetration enhancer content and occlusive effect of the carrier. The solubility of CBD in a skincare product must be high enough to sufficiently dilute enough of the active compound to reach the intended dose, while also ensuring that the final product will be stable and balanced. Therefore, enhancers such as polar solvents, like propylene glycol, are added in order to alter the functions of the skin barrier. They potentially increase the solubility of ingredients such as CBD so that they can be transferred through the stratum corneum, which is the outer layer of the epidermis. They might also have an influence on the improvement of the fluidity of lipid bilayers between the cells.

Scientists have experimented with four different solvent systems, two of lipophilic nature – liquid paraffin and virgin olive oil – and two of hydrophilic nature – propylene glycol 80% and polyethylene glycol (PEG) 400 80%- to investigate which one would be the best carrier for CBD transdermal application. The liquid paraffin and propylene glycol 80% appeared to be the most appropriate solvent systems for dermal administration of CBD, which makes sense as CBD is itself lipophilic (oil-soluble). Additionally, the research claims that these two carriers displayed similar diffusion and skin permeation in a 24-hour timescale. In terms of the amount of CBD retained, however, the propylene glycol solution proved significantly higher and therefore, is the best carrier of the four solvent systems tested. Notably, the liquid paraffin and polyethylene glycol were the vehicles in which CBD was less soluble. The research also claimed that a hydrophilic gel, mostly consisting of propylene glycol (79%, w/w), can be an optimal choice for the topical administration of CBD. It also demonstrated the feasibility of the CBD in the blood and better pharmacokinetics after (trans)dermal administration than with gastroenteric administration. This implies that cosmetic CBD products may be more effective than their ingestible counterparts.

In one piece of research, a CBD patch was compared in terms of efficacy to CBD in other carriers (such as virgin olive oil or PEG 400 solution). The CBD patch contained 10 times less CBD than the other applications but still the (trans)dermal patch exhibited a slightly better performance in terms of permeation rate. Meaning that with the use of patches, less CBD is needed to achieve better results. Based on this research, the permeation/retention profile of CBD could be modulated by changing the formulation composition. As reported, all tested formulation prevalently sustained CBD retention into the human epidermis. In the case of lipophilic formulations, the absorption ratio increased after the transition from liquid to semisolid. An opposite trend was observed for hydrophilic formulations [1]. Again, this makes sense when we consider that CBD is itself lipophilic.

Cannabinoids are not easily absorbed by either oral or unaided skin administration [2]. CBD is known to have low absorbance through the digestive track, which is the case for most nutraceuticals and fatty products. Transdermal delivery would bypass the first-pass metabolism of those cannabinoids with poor bioavailability. Nevertheless, polar molecules travel easier through the skin’s layers than non-polar compounds such as water, a side effect of the skin’s primary purpose as a water barrier. CBD is one of the most polar cannabinoids and is therefore one of the best choices to support the cutaneous Endocannabinoid System (ECS).

Studies have suggested the existence of a functional ECS in the skin which is implicated in various biological processes (e.g., proliferation, growth and differentiation of cells, etc.) [3]. Recently, endocannabinoid receptors were also found on human skin epidermal keratinocytes, dermal mast cells, Langerhans cells, sebocytes, sweat gland epithelium and various keratinocyte populations of the hair follicle which are active cells in the skin. Since these receptors have such a wide array of effects, Biro et al. (2009) claims that “the targeted manipulation of the ECS (aiming to normalise the unwanted skin cell growth, sebum production and skin inflammation) might be beneficial in a multitude of human skin diseases”.

In another study, CBD was used to treat inflammatory skin diseases and scars. During their research they noticed that after a treatment period of three months, the evaluated skin parameters significantly improved in all the patients. Specifically, the hydration increased by 6.4%, transdermal water loss improved by 23%, and elasticity improved by 23% on average. This effect on elasticity could of course be a result of the carrier cream through which CBD was applied, however, the researchers also noticed antiproliferative and anti-inflammatory effects of CBD treatment in patients with acne scars. These effects could be associated to the actions of CBD on the sebaceous glands. It is expected that CBD, like other lipophilic compounds, may reach and accumulate via the hair follicles, in the sebaceous glands (these glands are responsible for the lipid production of the skin, they are located within the hair follicles and are associated with skin quality, flexibility and acne) [2]. They theorise that CBD can normalise the elevated “pro-acne” agents, suppress cell excessive production and prevent the actions of “pro-acne” agents to elevate the inflammation cell levels [6].

To fully understand the ways in which CBD benefits the skin more extensive research is needed. The skin is a complicated organ that changes from person to person and even from one part of the human body to another. Additionally, the Endocannabinoid System is also a complicated system that we have only started to understand in recent years. The research so far gives us confidence that CBD not only absorbs into the skin but could also promote the skin’s homeostasis. There are, however, many additional factors that play in the correct and most efficient use of CBD for both oral and skin administration.

Back to Top
We use cookies on our website to give you the most relevant experience by remembering your preferences and repeat visits. By clicking “Accept”, you confirm that you are OVER 18YRS OLD and consent to the use of ALL the cookies.
Cookie SettingsACCEPT
Manage Consent

This website uses cookies to improve your experience while you navigate through the website. Out of these, the cookies that are categorized as necessary are stored on your browser as they are essential for the working of basic functionalities of the website. We also use third-party cookies that help us analyze and understand how you use this website. These cookies will be stored in your browser only with your consent. You also have the option to opt-out of these cookies. But opting out of some of these cookies may affect your browsing experience.
Necessary Always Enabled
Necessary cookies are absolutely essential for the website to function properly. This category only includes cookies that ensures basic functionalities and security features of the website. These cookies do not store any personal information.
Non-necessary
Any cookies that may not be particularly necessary for the website to function and is used specifically to collect user personal data via analytics, ads, other embedded contents are termed as non-necessary cookies. It is mandatory to procure user consent prior to running these cookies on your website.
SAVE & ACCEPT